Best Aptos NFT projects you should not miss 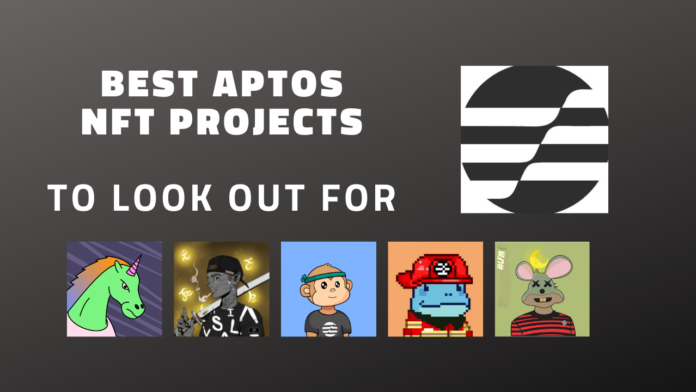 Aptos is the next best thing to happen in the blockchain world with a scalable layer 1 blockchain, and it is already doing well on testnet after the devnet was run on a large number of testers.now we talked about best aptos wallet Use it if you want to get an idea of ​​how things work on the Aptos network, but once that’s done, you’ll see the Aptos NFT market boom once Aptos enters the mainnet, i.e. launches. Last quarter of 2022.

As always, we’re sharing early on the best NFT projects on Aptos that are already committed to building community and sharing our vision with our users. missing in your collection.

A cute collection of jungle-inspired monkeys looking forward to living on the upcoming Aptos blockchain. This is one of his highly hyped projects, with nearly 10000 of his Discord members already on board at the time of writing this article. Aptos Monkeys has a certain morality, Aptos Monkeys connects native Aptos members with a community that fosters a caring, vibrant and energetic community that seeks to further develop the brand and the Aptos ecosystem. and extensive outreach to create a brand that can be used to build further connections with ecosystem growth. An avant-garde NFT collection that accompanies streetwear – digital and physical. As Server explains, InSilva is more than just an NFT collection. It’s a brand that puts NFTs at the heart of the experience, but it’s also an evolving and engaging narrative universe that addresses issues we face in our own lives outside the Metaverse. Through allegory, this story reflects the challenges and hopes of its community.

InSilva has grown to over 7000 and 4000+ followers on Twitter. In our eyes this could be Azuki he has ETH chain and community growth he is good as well as InSilva.

Simply put, these are punks on the Aptos blockchain. But that’s not all. As the project team explains: Punks is a rebel movement against the “status quo”, made up of many subcultures, each with their own beliefs and ideologies. ”

Those in the NFT space know how good Punks is as an NFT in their portfolio. Aptos Punks already has a great community built on the social platform, with over 6000 followers on Twitter and growing daily. About Aptoads as a project he said: We believe the best and brightest minds make their way to his Aptos, and this select group finds itself sharing alpha, building community, and participating in degenerate activities. prize. ”

In fact, it’s one of the fastest growing projects, with over 10000 followers on Twitter and the same on Discord. These are 1000 unique Unicorns NFTs on Aptos and some utilities the team mentioned include NFT owners receiving discounts and premium features on other projects, access to Discord chats and channels with alphas Includes private access, exclusive WL, NFT and crypto draws and airdrops. , and even NFT staking.

Other NFT projects to checkout on Aptos

Note: This list will be updated as more information about the project is found. You can contact me on Discord Chetan#7559 Just in case you want to list your project here.

Apple Will Allow NFT Sales In Apps, But Will Apply 30% Commission Fees

Roger Waters Shows in Poland Canceled After Remarks About Ukraine